skip to main | skip to sidebar

Textiles have become the fastest-growing waste product in the UK. About 74 per cent of the two million tonnes of clothes we buy each year end up in landfills, rotting slowly (or not at all) in a mass of polyester, viscose and acrylic blends. Where is Steptoe when you need him? 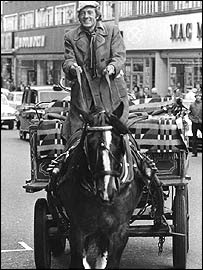 Another charity bag flopped through our letterbox this week. Unless they are collecting stuff to sell in their charity shops, it's best regarded merely as a way of clearing out clutter if you can't be bothered to go down to Oxfam with your old duds. Or preferably as a binliner. If you read the small print you may spot that the collector for the Lithuanian breast screening project with its pink ribbon isn't a charity at all, although their website seeks to reassure people "that their clothing donations will only be used to fund worthwhile, bona fide charities" - in Lithuania. Even if this week's bag is supporting a pukka UK registered charity, you may find that they get very little out of it.

This one, for example, is in aid of Childline, an organisation that has helped thousands of children with no-one else to turn to. The bag gives details of the charity, with their helpline prominently displayed and the charity registration numbers as required, and the details of the company which actually operates the collection on their behalf. Childline will get £50 per tonne. A tonne is an awful lot of "clean, good quality clothing... and bric a brac". Cambridge Oxfam might well charge £10-£15 for a dress, more for a designer label. See also the Salvation Army value guide. Unsorted mixed used clothing is being sought by a merchant in Bedfordshire this week at 50p/kilo (ie, £500 per tonne). And old bras can fetch up to £2,500 a tonne.*

As far as I know, Childline doesn't operate any charity shops, so this kerbside collection partnership with a commercial organisation is a low-admin method of raising funds that wouldn't otherwise come their way. But you'd be making better use of your resources to give the clothes direct to a charity shop and make a donation to Childline. You can afford to be generous. 50p would be twice what your 5kg bag of castoffs would earn in this particular charity bag scheme with its promised rate of £50 per tonne.

Charitybags campaigns for greater transparency in the field. Their website is a trove of information.

We estimate that around £20 million income is lost by genuine charities each year because of misleading, bogus and poor-value "charitable" house-to-house collections of clothing etc in the UK. Many of these collections are illegal.

You need a local authority licence to collect door to door for charity, even just clothes and bric a brac. Some charities (eg Age Concern, Oxfam, Red Cross, RNLI etc.) have a national exemption, but they are supposed to inform the local authority when they are collecting in their area. Some may have a local exemption granted by the police. If you want to hold a jumble sale for your scout troop and collect door to door for it, this is the route you'd take.

Of course, jumble sales and charity shops fulfil a social need for the purchaser as well as providing income for the charity in question. And a low-guilt solution to the overloaded wardrobe.

But where there's muck there's brass. Second hand clothes from Britain end up on markets in Lithuania and Belarus, and much further afield. According to UN Chronicle,

An estimated 40 to 75 per cent of used clothing donated to charitable organizations end up not in the hands of the needy in the West but in busy markets across the developing regions, such as in sub-Saharan Africa.

It's not the end purchasers I have a problem with (and they are probably being ripped off) but the dodgy operators.

At least with Steptoe, you knew who was going to benefit.

Whatever you do, don't let it go to landfill. (A very old paper, but the principles still apply.)

*On African markets. Apparently Africa lacks an inexpensive, good-quality bra manufacturing industry. (Check the link - it's a fascinating insight into what happens to old clothes.)
at 6:49 pm

Labels: bric a brac, the state we're in

The Joy of six